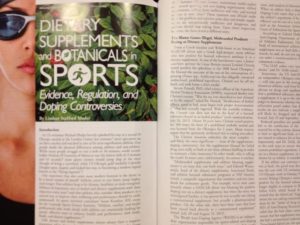 Check out the November 2012-January 2013 issue of HERBALGRAM, The Journal of the American Botanical Council in which Rick Collins is quoted in the featured article about the use of dietary supplements in the sports industry.

“The bill corrects the terrible design and drafting of the previous anti-steroid legislation from 1990-2004…The new bill, if passed, is structured to accomplish what Congress likely intended in its prior botched efforts: to criminalize a long list of specific compounds as well as unlisted steroidal substances that are similar to them.”

The article concludes by stating what the author believes is necessary to make progress in the industry.  “In order to progress toward resolving these issues, responsible parts of the dietary supplements industry, analysis labs, sports and anti-doping organizations, and the media must collaborate to support athletes through education, vigilance, and open-mindedness toward the reality of the situation.”[1]