by Rick Collins in CGMB in the News 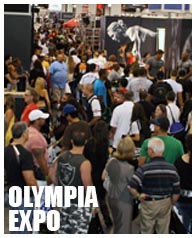 Collins, McDonald & Gann will once have a strong presence at the upcoming Olympia Fitness and Performance Weekend this weekend, as thousands of bodybuilders, fitness enthusiasts and leaders in the dietary supplement industry gather for what is one of the most prestigious international bodybuilding competitions and fitness expos in the world.  The Dietary Supplements Division of CMG — Rick Collins, Alan Feldstein and new legal assistant David Torreblanca — will all be attending the event, which is taking place from September 26th – 29th at the Orleans Arena and Las Vegas Convention Center in Las Vegas.

This year, Rick has been asked to speak at the Olympia at what is sure to be one of the most popular seminars at the event, as he reunites with filmmaker Chris Bell — director of the 2008 acclaimed documentary Bigger, Stronger, Faster  – for an interactive Q&A seminar addressing performance enhancing drug issues in sports.  Chris and Rick, who appeared in the documentary addressing legal issues with PEDs and served as a consultant to the project,  will answer questions about performance enhancing drugs and sports, discuss what has changed in the industry since the release of Bigger, Stronger, Faster five years ago … and address what the future may hold concerning PEDs.  Rick and Chris premiered the film together at the Sundance Film Festival in Utah upon its release, and last appeared together two years ago when they spoke at a special symposium about steroids and sports held at Hofstra Law School.

Rick and Chris will be leading their seminar on Friday, September 27th from 11 a.m. until noon at the Muscle & Fitness Booth on the Expo Floor.  If you are planning to be at the Olympia on Friday, please stop by the Muscle & Fitness Booth to meet with  them and hear about some of today’s top issues surrounding PEDs – as well as to say hello and ask any questions of two of the most established experts in the field.  Visit http://www.muscleandfitness.com/news-and-features/athletes-and-celebrities/mf-booth-will-be-home-athletes-entertainers-olympia-expo for more information.

For more information about the Olympia, and a complete schedule of events taking place throughout the weekend, visit www.mrolympia.com.

Looking forward to seeing many of you there!